Autumn ~ The Season of Rich Reward

The Goddess of Autumn is holding court in all of her autumn finery and I am, gratefully, a guest at her table. 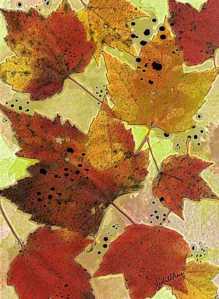 I think that autumn is truly becoming my favorite season. In my realm of the northern hemisphere winter predominates for six months, from mid November to mid May, leaving the remaining seasons to share the other half of the year among them. Spring bulbs often get nipped by a late, last frost, summer seems to be the most mercurial of them all–with occasional low temps that feel almost like winter, and then, almost overnight, fall is upon us and tender perennials wilt in the cold nights of early September.

Yet, every so often we are blessed with an autumn such as this year’s. This is what I’m talking about when I say I’d gladly trade a month or two of early winter for a lengthier fall transition.I suspect it is a fitting analogy to my stage of life as well. I would much rather linger in this sweet spot of relative health—physical and mental firmity—than slide too soon into a lengthy old age. 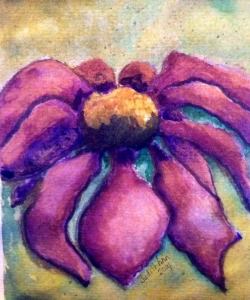 So for now, I am living in the moment, enjoying all that I have to be thankful for, including the rarity of fall days with temperatures to rival summer’s best (and minus the humidity). I am drinking in the beauty of deep orange, red, purple and gold with which Mother Nature has dressed her hair. I am relaxing in the misty morning sunrises and rosey hued sunsets. It’s like finding the pot at the end of the rainbow and discovering it’s brimming over with jewels and gold bullion. I feel a sense of enrichment during this time of the year more so than any other. I feel a sense of accomplishment, and a sense of possibility, a space to expand into for the future.

As I head into the dark half of the year, a time for turning inward and staying close to home and hearth fire, I am taking this moment of richness and rewards reaped, to ask–what next? 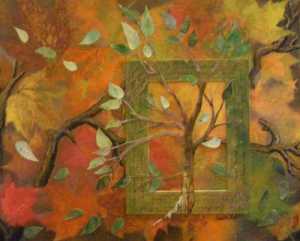 If you have been following the journey of the Dark Moon Lodge, we have come to our fourth and final task. Click here to learn how to sustain your life of enriching experience.

Traveling The Road of Good Intentions

Spring has sprung and it’s been a hard cold winter baby. But this is the season of new beginnings, a new season of growth, flowing into summer.

Unfortunately for me, I’ve been going with the flow and growing in all the wrong ways these the past few months. I took the wandering gypsy wagon on the road, pointed south and escaped the worst winter had to offer, for a few months at least. I tried telling myself that I was going to start some new habits. I was going to use my two months of leisurely snowbird living to bike, swim and eat a lot of salads. I ditched the cold winds of winter and with them, my couch potato tendencies. I planned to come home ten pounds lighter.

In fact, I came home packing a few more saddlebags than I’d left with. What the heck? Where did I go wrong?

Talking about adopting new habits is exciting and hopeful, and there is a powerful feeling that comes with the declaration to kick an old pattern to the curb. But when considering changing routines and habits, actually exchanging old habits for new, suddenly there is the implication of hard work, not to mention the gloomy possibility of not succeeding.

I’d like to blame my middle age body that finds new and more sadistic ways to spirit my youth away from me. While it’s true that middle-age-spread is part of the equation, the ultimate undoing of my grand plans was my utter lack of a good plan to begin with. I missed one very important step. Replacing what I was taking away with something not only better for me or more condusive to my goal, but equal in the satisfaction factor.

I’m sure my body is very grateful for the invigorating physical activity, but that doesn’t change the fact that both my body and mind missed the pleasures of lounging on a soft surface, preferably in the sun, reading a good book. Or snuggling up in a down quilt on a cool night, watching a good movie, whiling the hours away with my cat purring beside me. I still craved that pleasure. My mistake was not knowing ahead of time what I would replace it with, and so I mindlessly over indulged in food — glorious food, and drink.

Hey, don’t judge. There’s a lot of pleasure to be had in good regional cuisine and libations. But even with the physical activity I added, I was packing on more calories than I was burning off. I’m thinking now that a better plan would have included a few hour long massages and frequent regular steam saunas whilst drinking lots and lots of water. Both would be ample enough reward to motivate me to steer clear of the extra helpings.

Depending on which guru of change you listen to, it can take 21, or 30, or 45, or 60, or even 61 days (really – one more day is going to make that much difference?), to form a new habit. Much of it depends on what the new habit is and whether or not it’s replacing an old habit.  Habits are patterns, they are like grooves in a record and the longer you’ve been playing the same old tune, the deeper the groove. It’s far easier to slip back into old patterns, than it is to stay the course of new ones. Such is human nature.

So it’s back to the drawing board for me, with deference to the middle-aged-metabolism-slow-down and a plan that will offer some measure of reward that doesn’t come by the cupful.

In this season of renewal are you considering making some changes in your life?  Check out my four step plan of Self C.A.R.E for making change that lasts and enriching your mid-life years.

*For those who have joined the Dark Moon Lodge journey, click through for newly posted creative journaling prompts. Remember the password is “darkmoon”.

Leave a comment | posted in Dark Moon Lodge, Self Care

I have a bluebird nesting box at the corner of my garden. Every spring, a pair of Eastern Bluebirds shows up around my birthday (a few weeks from now) to set up household. I don’t know if it’s the same pair every year, or even if they are offspring fledged from the nest the previous summer. 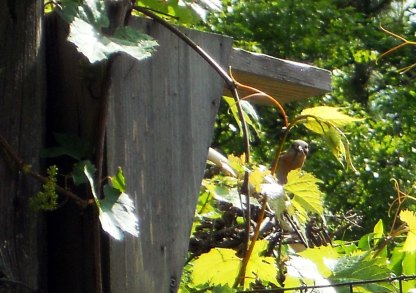 No matter, I named them after my maternal grandparents and each year, same pair or different, I welcome Sam and Betty back to the corner of my garden sanctuary. Then I sit back to watch the show of nest building, predator smack downs, food gathering and baby fledging.

Until this very moment, I’ve never questioned why I find so much joy in watching these birds in their dance of procreation. I think, maybe, it’s the reassurance they give that all is right with the world, that minus human weakness and drama, the earth keeps spinning and life continues on.

Who better to remind me not to sweat the small stuff than the harbinger of happiness? The association of the bluebird with the emotion of happiness is found in numerous cultures and dates back thousands of years, the oldest evidence being found on oracle bone inscriptions in pre-modern China. Interestingly enough, in the Tang Dynasty the bluebird evolved from a fierce goddess into a fairy queen, the protector of singing girls, novices, nuns, adepts and priestesses – women who dared to step out of traditional roles. Now that’s a legend the MAD Goddess can appreciate. 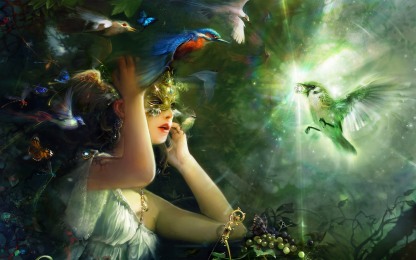 Happiness is based in many things including a feeling of contentment, fulfillment and purpose, in relationships and life circumstances.  In the traditional roles of women, we often spend more time and give more effort to ensuring others’ happiness; parents, partners and especially children. This isn’t to say we aren’t happy in doing so, but then one day, we find our nest empty and ourselves wondering, what next?

The empty next lies before you with all the promise of a new Spring, just waiting to be seeded with  your wildest dreams. How will you manifest your happiness and watch it grow in this second half of life?

If you are joining me in the *Dark Moon Lodge, we are stepping out and stepping into spring – the season of stirrings. We’re planting our seeds and nurturing our dreams into growth. You can find out more about the journey by clicking here (use the password darkmoon).

*When the moon is new, and associated with beginnings, growth and increase, it cannot be seen in the night sky – this is why it is also known as the dark moon – a void, not to be feared, but to be filled.