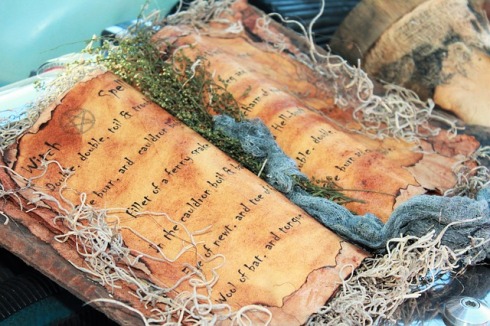 What’s a magical tradition without mysterious words that sound unusual to our ears? Well, in my opinion, not nearly as much fun.

I know, you’re not here to fool around. You’re serious about witchcraft, not one of those fluffy bunnies you’ve heard about, scared of their own shadow, literally.  (We’ll talk about shadow work another time).

It’s okay. Witchcraft done right is like anything else in life; optimally what we strive for is healthy balance in all things. The MAD Goddess’s motto is, “Life wants to be fun. Let it.” because most of us can benefit from learning how to get out of own way.

So as you travel along your path of becoming witchy, remember to look for the fun.

Now, on to the mysterious and unusual words! This is by no means a complete list. It’s more of the need-to-know, pared down, starter version. I’ve left out commonly understood terms like consecration and I’m saving words that apply to more advanced practice for later in the journey. Because . . . even a brain surgeon starts with basic anatomy. (Read more about getting started).

I’m keeping the definitions brief. A curious witch’s best tool on the internet is her fingertips . . . to type in searches for more information. Why, because a witch must learn to let her curiosity lead her to knowledge. Also, because I believe one of the most important factors in becoming a witch is taking personal responsibility.

So, this here’s a list to get you started. May it take far in your witch’s quest—the pursuit of knowledge.

ale and cakes: an offering of food and drink to the Goddess/God during ceremony.

athame (ath-a-may): A double-edged dagger or blade, usually with a handle of natural material, like bone, antler or wood. Used primarily as symbolism for ceremonial purpose. Associated with the element of fire, it is commonly used to direct energy, as when casting a circle.

bane: Something destructive, harmful, that causes great stress. To be baneful to another is to be disdainful or act in hurtful, cruel ways toward them. Literally, a bane is a poisonous substance that can cause severe illness or death, such as henbane, which will kill chickens if they ingest it.

besom: The witch’s magical broom, not used for mundane cleaning, but directing energy.  Often handmade (but you can buy decent ones during the Halloween season). One uses their besom to magically sweep unwanted energy from a space. The bristles of a besom should never touch the floor, rather sweep the “space” just above the floor.

book of shadows: Also BOS—This is the practicing witch’s personal diary of sorts. The place to record useful or often used knowledge/reference, but more so the record of the journey, spells cast, herbs used, elixirs and potions made and the results of all of it. Think of it like a scientists notebook, where each magical working is described and the results are recorded.

cakes and ale: (see above)

casting: refers to casting (performing or working) a spell, and also casting a circle. In casting a spell, the witch creates or manifests energy and sends it out to do it’s work. A circle is cast to create a closed, sacred and protected space for rituals/rites or other workings by calling quarters—summoning the energy of the elements at each compass direction to create the boundary.

cauldron: A cauldron is traditionally a a deep, rounded pot, most often of cast iron or other heavy metal, used for cooking over an open flame. In witchcraft, it is symbolic of the womb and creation. They mystery of the cauldron refers to the cycle of birth, death and rebirth. Modern witches are pretty much cooking up their potions and brew in the kitchen on modern appliances – but many use a cauldron indoors for safely burning herbs, or written spells, petitions and symbols of what they want to release.

circle: The cast circle is a sacred and protected space “between worlds” where the witch performs ceremony, ritual or rites. When the circle is cast, it is said to be closed. When ritual/rites are complete, the circle is opened by releasing the elemental energies in widdershin (reverse) order. Circle may also more casually refer to a group of like minded seekers/practitioners that are not specifically a coven.

dark moon: The phase of the moon immediately before new moon, when there is no visible moonlight. Considered a favorable time for doing divination and shadow work. More often than not dark moon is interchangeable with the calendar occurrence of the new moon, though some observe it the day before the new moon.

*When working with the energies of any moon phase, most practitioners agree that while the optimal time is that nearest the exact astrological occurrence, there is a three day window of opportunity—day before, day of, and day following.

directionals: The cardinal directions are compass points—north, east, south and west. Directionals refer to the energies of these, north corresponding to earth, grounding, roots, stability, rocks, minerals, etc. East corresponds to air and inspiration, the breath of life, the unseen wind, intellect, thought, ideas. South corresponds to fire, passion, courage, action, destruction and renewal (as rising from the ashes). West corresponds to water, fluidity, purification matters of the heart, emotions on both sides of the scale, love and hate, joy and sorrow, etc.

elementals: Earth, Air, Fire Water, and sometimes—or by your preference—Aether/Spirit. See directionals above. Casting a circle begins with calling the elementals to mark the boundaries.

esbat: The full moon, and/or the festivals, rites and observances of such.

grimoire: Often mistaken with a book of shadows (BOS), the grimoire is more of a compendium of necessary information, including correspondences, astrological facts, magical plant properties, etc. Not as personal as a BOS, a grimoire is more of an all encompassing reference to all things witchy.

grounding: Very literally, connecting to the ground by the act of touching firm ground after magical workings. Grounding is thought to discharge the energy that gives one a “spacey” or anxious/agitated feeling. In some cases, anything that connects you back to your physical body is considered grounding. Often times eating a small bit of food is used in this manner. Also interchangeable with the practice of centering oneself before magical workings or meditation – sending your metaphysical “roots” deep into the earth.

hex: From the German language, hexe, meaning witch. A hex is used to create bad luck on someone else. A hex sign is often used to protect oneself from incoming hexes.

pentacle: A five pointed star inside a circle.

rite/ritual: Also ceremony. Performing magical practice (chants, symbolism, correspondence, etc) for the purpose of devotion, worship, petition, intercession/assistance, manifestation, etc. The purpose is to create focused energy to a desired purpose and then release the energy to “do it’s work”.

sabbat: The eight seasonal observances on the wheel of the year. Sabbats fall on or near many Christian observances, and many pagans believe that the Christian holidays both appropriated pagan culture, and were also an effort to appease the pagan community.

scry: A form a divination using a reflective surface such as mirror, crystal ball, bowl of water, or a body of water – ideally under a full moon, to see images that convey a message.

talisman: an object most often carried or worn (can be displayed on an altar), believed to have some sacred properties, or imbued with specific properties by the witch. Common uses for talisman are to bring good luck, protection, health and to increase magical powers. Often interchanged with amulet or charm.

wane: The act of decreasing, as in the waning moon phase after the full moon. In spell work, tapping into the waning energy of the moon when a decrease of something is desired—for instance, a spell for weight loss, or to lessen anxiety.

ward: To repel or hold off, such as a spell, talisman or energy force to ward bad luck or destructive energy/magic.

wax: The act of increasing, as the new to full moon phase. Beneficial for magical workings calling for increase.