Happiness Is Wanting What You Have

Somebody said that. I don’t know who, or if they were important or well known. Whoever it was also added that happiness is not having what you want.

Fifteen years ago I was meandering around the interwebs looking for things. I wasn’t sure what things, but things that would fulfill me, fill me. I’d know when I found it.

I found SoulCollage®. I knew I wanted it, or rather, wanted to learn how to create the telling cards and use the system of self discovery that was going to bring positive change in my life and others I would teach.

Unfortunately, I didn’t have the spare change to fly my ass out to the West Coast, the only place training was offered at the time, let alone to cover the fee for the weekend intensive. So, I did what I always do, read every word I could find and improvised.

Almost ten years later, SoulCollage® training made it’s way east, to Chicago. This time I scraped up the fee, enrolled in the training and pointed my little VW Bug toward the Windy City.

It was everything I expected, and less. Let me explain. I was not disappointed in the least by the substance and quality of the training, the experience of community that I found with those of like mind, or the unique location—a former Catholic campus, turned residence home for retired nuns and priests.

Are you kidding me? A gaggle of middle aged feminists dallying with tarot-like image cards to access our soul purpose? We may as well have hauled out the Ouiji board and pentagrams.

Turns out the nuns were not only curious, but very open to the concept. As I explained it to one of them over lunch she smiled and said to me, “Oh, you mean you’re trying to know your inner Christ.”

So, back to the part about being less than I expected. It didn’t change my life in any revolutionary way (at least not then). Probably because like many things I want with all of my being when I see them, once in my possession there are new wants to pursue. Nature of the beast, or nurturing from a consumer driven environment pushing us to always acquire more in our doing, being and having? New flash!  There is never enough, we are never enough in that paradigm.

So, as it turns out, I’ve made quite a collection of SoulCollage® cards, and a funny thing happened along the way, a subtle change in my wants. Sure, some of my cards  speak to me about consumption and abundance, and time running out, about wanting what my eyes see—like this one. Can’t you just hear her, saying it . . . “Oh, I want that!”

But so many others are about hidden magic, creativity, freedom from expectations and a sense of wonder at the unexpected. Like me, a recovering Catholic school girl pulling up to a nunnery and not running in the opposite direction; totally unexpected. Or so enjoying the three days spent there that I have wanted to return ever since!

It’s where I’m at and who I am right now. And it’s enough. 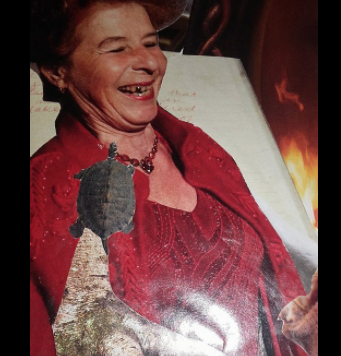 Like Loading...
This entry was posted on Saturday, September 2nd, 2017 at 11:58 pm and tagged with Achievement, Goals, Joie de Vivre, Life Enrichment, Magic, manifesting, Personal Development, Purpose and posted in Joie de Vivre, MUSINGS. You can follow any responses to this entry through the RSS 2.0 feed.
« From Deep Chocolate to Red Velvet Cake: One Woman’s History of Hair Color
These Things Happen »

7 responses to “Happiness Is Wanting What You Have”