BACK IN THE SADDLE

By JL
My virtual-world friends David and Veronica, over at GypsyNesters, were featured on Huffington Post lifestyle page today.  I’m thrilled at their success, both in their chosen lifestyle and their growing notoriety.  I’m a firm believer in what they have to say about life after raising children being the next chapter, and not the end of the book.
On a personal level I’m happy because this latest milestone of theirs has prompted me to post on this blog, which, you might note, has not been a frequent habit of mine lately.
I’ve been following the GypstyNesters since about half-way through their first year of travels.  They are living the life I was supposed to; the life I’d been diligently preparing for much as the Nesters did, by eliminating debt, raising kids to be personally responsible, living simply, and paring down.
The details of how my wanderlust life would play out were a bit different than theirs.  My hubby was an over-the-road truck driver.  My plan was to quit my day job the minute the youngest graduated and hit the road as partner to a long haul trucker.  He already knew what living on the road entailed, and I’d gone with him for enough two-week stretches to have a good idea.
With an average of 310 days a year spent on the road, there wouldn’t be much sense in keeping a home with all its associated taxes and upkeep.  No mortgage, no taxes, no maintenance and no money spent on all of those things we fill our home with, not to mention the pastimes we pursue to “get out of the house” (think about that), AND a steady paycheck still coming in, equals saving for a damn comfortable retirement 10 years down the road.

Aside from that, I’ve been stifling the gypsy in my soul for most of my life.  While most teenagers faced with the prospect of having to move away from their high school and friends stamp their feet in whining protest, I needled my parents to pick up stakes and make the move they were holding off on until I’d graduated.
I’ve dreamed of running away with a traveling circus so often that sometimes I start to believe I did.
But fate had another plan for my empty nest years, and that’s why I belong to the portion of the GypsNesters’ audience who are living vicariously through their writing.  Hubby’s health took him off the road and the demands of long hours driving a motor home and setting up camp regularly aren’t advisable.
This leaves us with only one solution; that I must learn how to drive the truck and travel trailer we now own, or the motor home it could be traded for.
I once owned an F150 pickup. It wasn’t pretty – the situation, not the truck.  The truck itself was really quite pretty, all dressed up and everywhere to go, as I like to say – meaning fully loaded and four-wheel drive.
The unpretty part was my inability to drive the behemoth that dwarfed me behind the wheel, without running over or backing over everything in my path.  You must understand that this comes from a woman who once backed her own Ranger pickup into the family full-size van in her own driveway.
Yes, yes.  I’ve heard all the lectures about inattentive driving and I’m not denying that I deserve them.  The point is, I am who I am and it’s probably not a wise thing to put me behind the wheel of any vehicle that’s too much larger than my beloved VW Bug.  And especially not when the co-passenger (my hubby) has a bad ticker.
Thus, my ineptness behind the wheel, along with my fears for the toll long hours of driving would take on my hubby have all but cut the wings of these empty nest birds.
So, why has reading about my friends’ continued adventures on the road got my juices going?  In the words of my beloved, departed mother – it would seem I’ve gotten “a wild hair up my ass again.” 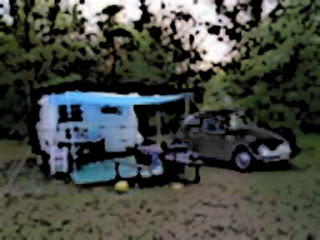 I’ve started looking at Scamp trailers. They look like little marshmallows being towed along behind vehicles of all make and size, but can you imagine how gosh darned cute one would be rolling along behind a VW Bug?  (Don’t talk to me about engine size and towing capacity – where there is a will there is a way).  Talk about a Mickey Mouse rig – I’m sure I’d have no trouble at all maneuvering through any kind of traffic or terrain.
Back when David and Veronica were casting the net for their road warrior conveyance, one of their requirements was that it had to provide enough head room for David.  If you knew my hubby, you’d know that a little Scamp comes up lacking in both the height and girth dimensions.
This isn’t to say the ol’ boy is fat. At 6’2 and hailing from hearty European stock, my husband is a big, big man. Oddly, the Bug is quite roomy enough for him, but a Scamp’s table/bed leaves much to be desired in the stretching out department. The poor man would have to assume the fetal position to sleep.
My plan is to buy an old, worn-out model, gut it out and use it as a cargo trailer to haul our necessities, including one of those blow-up “guest” beds. Wherever we park, we can pop up the screen tent for our “outdoor” room, set up the grill, and put out the lawn chairs.  Coolers will serve double duty – when empty and dry, they will be cargo bins. Once set up, a quick trip to the nearest store and they’ll be filled with ice, food and beverages.
During the day, the empty scamp will be a roomy, walk-in dressing room.  At night, we’ll inflate the bed and have wall to wall sleeping space.  In the event of inclement weather, we can set the lawn chairs and a small table inside for the day.
If I have to say so myself, (and apparently I do, ‘cause hubby isn’t buying it) I think it’s an ingenious plan. So if you are out traveling the by ways of America keep your eyes open.  You might just see us and our Mini-Mouse-House scampering along. Don’t forget to wave!

GET A ^ LIFE at MAD Goddess
Advertisement

Like Loading...
This entry was posted on Thursday, January 12th, 2012 at 2:35 pm and posted in Aging Gracelessly, The Empty Next. You can follow any responses to this entry through the RSS 2.0 feed.
« I CONFESS – I HAVE HAD A SECRET LOVE
THEM BONES, THEM BONES, THEM DRY BONES »