By the Numbers & In the Cards 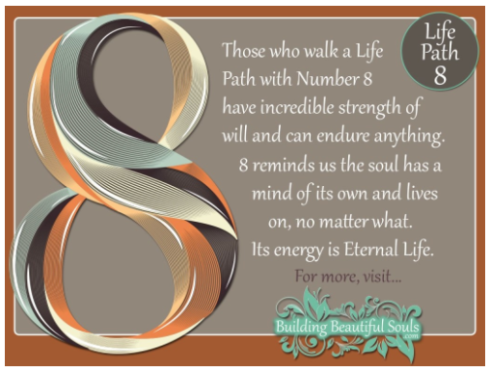 For a good long time in my life, I have been fascinated by the mystical—blame it on my Catholic immersion, nine years of elementary education in a Catholic school attached to a diocese cathedral. Throw in a smattering of attendance at my father’s Christian Orthodox church and you’d be hard pressed to find a more acceptable and mainstream model of ritual and magic.

Yes, magic. All of the elements of the Roman Catholic and Orthodox Mass, the candles, the incense, the regalia and adornment, the chanting and repetition—all of it correspond to magical ceremony. And the high holy grail of it all?  The changing of the bread and wine into the body and blood of Christ through intention, played out in a very precise ritual? That’s alchemical high magic, baby.

Still, I am a skeptic of things spiritual; whether you call it miracle or magic, afterlife or ghost realm, as much as I want to believe it all exists, I can’t quite get there. I want solid proof.

The funny thing is, I’ve had more than a fair share of personal experiences that strongly support the mystical and paranormal, too many in fact, to list them here. But like Thomas who would not believe in the risen Christ until he could poke his finger in the wounds, I want indisputable proof. I want to see my brother or my parents materialize before me and hear at least one of them tell me something nobody on this earth knows.

My doubt doesn’t stop me from being intrigued and entertained with it all. I’ve developed a sort of take on things that fits into my rigid box. Magic happens when we access parts of our deep, reptilian brain, our rooted animal instinct. I beieve the observance, connection and logical predictions occur on a level so deep we aren’t even aware of them.

But there is an uncanny accuracy to these metaphysical means of receiving information that twangs my radar for magic afoot. I’ve had my share of hours on a therapist’s couch and as far as knowing how I tick, what my motivations and my needs are, I have to say my astrological birth chart gave me all the same information at far less the time and expense. Although, I think it’s obvious, therapy serves other purposes beyond just understanding how you tick.

I don’t read my daily horoscope, instead I prefer using a tarot deck. Even though I lean way over in the direction of tarot for entertainment, it seems more than coincidence that out of 78 cards, through the years and years of drawing from the deck, I’ll see the same ones coming up over and over again. There are cards in my deck I have never drawn for myself, but they will turn up when I’m reading for somebody else. How does that happen?

Today I found myself in a conversation about using numerology to find one’s personality and soul path cards in the tarot deck. Numerology is fun, I long ago found my birth number is 8, arrived at by adding the numbers of my birth date sequentially and then adding the two digit result to arrive at a single digit. 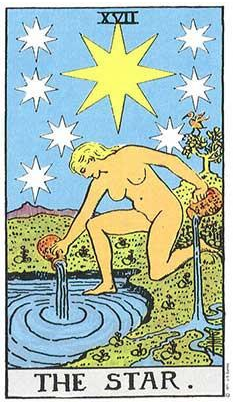 There is a twist, though, when applying it to the tarot deck. Since there are 21 major arcana, only numbers above that are combined down to one digit. So my 17 corresponds to the Star in the tarot deck. One card short of the Moon, which I would have preferred. But then, my mother planned my birth date (and those of all my siblings, there’s a whole other story in this) to fall on her mother’s birthday, a day later than I actually arrived. A number that would link me with the moon. Those who know me well, know the significance in that.

In tarot, the major arcana cards lay out a journey of sorts, beginning with the Fool, who is all about youth, energy and adventure, jumping in with both feet, never testing the water first. Innocent and unscarred, the Fool is childlike, joyful and ebullient. The Star comes along after the Tower. The Tower is a total shake-up of everything, a reversal of what’s been, the representation of it all coming down—or tearing it all down.

The Star is a transition into the next leg of the journey, the first step in a more spiritual path toward enlightenment after traversing some of the harder knocks (lessons) in life. It’s often interpreted as having faith, believing that everything has meaning and happens for a purpose. The Star is a card of hope.

My soul path reverts to the added digits, or 8. This is the Strength card, something that surprised me at first. The first time this card ever turned up for me in a reading was just recently. I don’t think of myself as strong, but in honesty I have to say that I rarely let anything defeat me if I can help it, a trait that causes others to label me stubborn. I am an Aries (the ram), fiery and determined.

What’s even weirder though, is that some decks put the Justice card at this position, the only two cards that can vary from deck to deck. My father wanted to send me to law school. Turns out I should have listened—I realized too late that I would have made a great lawyer, and would have loved it. Instead, I write murder mysteries, which is way cool too.

According to this Star and Strength combination, I am the epitome of eternal hope. Strength is a fire card fanned by the air of the Star. If that translates to never giving up, never letting anything or anybody keep me down, if it means lighting fires under myself and others, then yeah, it’s pretty much me in a nutshell.

But, I don’t believe this stuff really works . . . it’s all just coincidence, right?

Like Loading...
This entry was posted on Tuesday, April 3rd, 2018 at 11:49 am and tagged with Magic, Numerology, Purpose, Tarot and posted in CRONE WISDOM, Magic, MUSINGS, RITUALS & PASSAGES. You can follow any responses to this entry through the RSS 2.0 feed.
« The Ties That Bond
Color My World »

8 responses to “By the Numbers & In the Cards”