What were the Gods thinking . . . or the Goddesses for that matter? If they were going to create men with a propensity to emit snorty, snoring rumbles from the time their heads hit the pillow until they shake themselves awake, why on earth did they make women light sleepers? 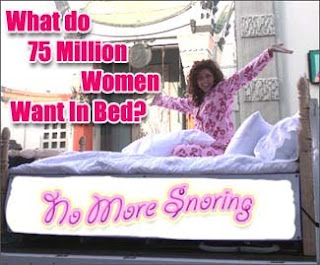 Oh sure, it’s great to have an acute sense of hearing if you’re a mother. Most of us hone in on the changing rhythm of our baby’s breathing before she or he can even muster up the 2 am “feed me” cry.

And as time goes on, just let those demon-teens try to slip out of the house unnoticed, or sneak back in late at night.  The sound of a door hinge creaking or a window sliding open will wake me from a dead sleep at 100 yards.

So lying next to Mr. snort-a-lot is like trying to sleep in a culvert with a locomotive rumbling over the top of it. He tells me that, on occasion, I snore too. What? Okay, maybe so, but my little burbling, murmurs have never woken him up, let alone kept him awake an entire night.

That’s a nice way of saying that our silent, piercing stares leveled over cups of hot, black coffee, shine with a murderous glint.

“Stop singing!” I tell my hubby when he feels musical in the morning. “You don’t know the right words anyhow!” Any other time I find his creative lyrics wildly amusing.

He offers to make breakfast. “Just coffee,” I growl. “I would think you’d know that by now.”

He sits at the table with the morning paper “Do you have to read the newspaper in here? Can’t you go into the living room?”

I don’t know why he insists on saying I’m ornery in the morning. I just like it quiet for the first few hours . . . for contemplation and meditation. Silly man, he thinks that we should greet the day together, all cheerful and lovey-dovey.

I try to circumvent such nerve-jangling morning rituals by replacing them with others. Like dragging my exhausted body out of bed an hour before he awakes so that I can dose myself with caffeine (and maybe a little sugar) in the hope of shape shifting back into a human.

I found this great little gadget, like a wristwatch, that supposedly stops snoring by sending a light electrical impulse to the snorer, training him (think Pavlov and conditioning) to stop snoring. All I can say is don’t let a blurry eyed, sleep deprived wife at the controls or her snoring hubby might get more of a shock than he bargained for.

Now that I think of it, my friend has a taser from her law enforcement days.  I wonder if she’d let me borrow it?

I’m starting to go deaf. I know this because I hear things that just can’t be. I gave my sweet grandson a sock monkey for Christmas. He’s at that babbling stage, where he carries on entire conversations with himself, and those of us listening can make out only about half of his words. Come to think of it, maybe I’m the only one who can make out only half.

One day he was waxing on and on and what I thought I heard put me in a state of shock that was broken only by my own uproarious laughter when my daughter reassured me that he said funky monkey. “It’s a song, mom,” she assured me.

More and more of my everyday conversations have an added element of surprise. “Can you straighten the hose?” hubby asked me when I was sitting on the deck finishing my manicure. “There’s a kink in it.”

“You want me to paint your toes? Pink Peppermint?”

Well what does he expect?

The irony is, that no matter how bad my hearing gets, his snoring is going to be the last thing I can still hear.

Maybe we were designed that way; a primitive security system that let an aging cavewoman know she could sleep safe and sound because her caveman was still there protecting her. . .

. . .if she could squeeze a wink in edgewise between snorts.

GET A ^ LIFE at MAD Goddess
Advertisement

Like Loading...
This entry was posted on Friday, February 26th, 2010 at 2:12 pm and posted in MUSINGS. You can follow any responses to this entry through the RSS 2.0 feed.
« IN SEARCH OF MERMAIDS
I’D RATHER LOSE MY CAR THAN MY PRIDE »

2 responses to “ON DEAF EARS”